No deposit required. Get 10% off when you book online! For rec dives and courses.

Get 10% off when you book online!
No deposit required.

Thank you! Your submission has been received!
Oops! Something went wrong while submitting the form.
BACK 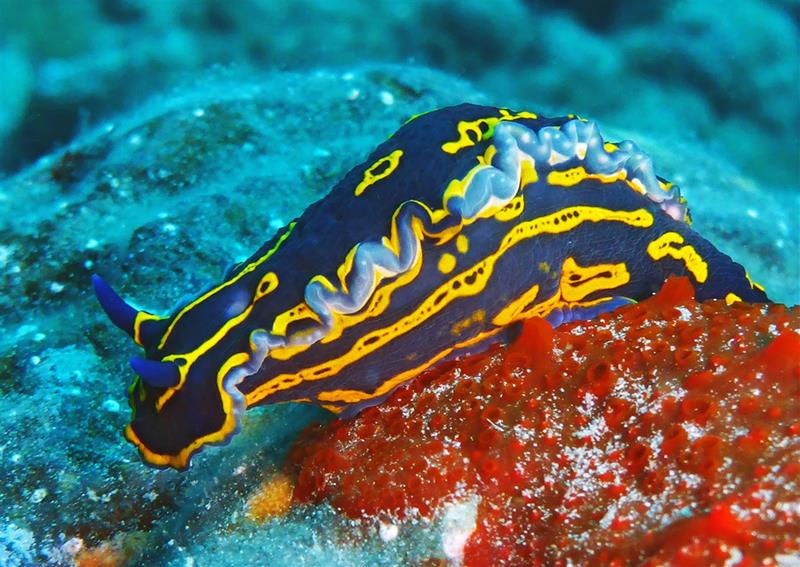 Over the years Blue Water Diving has spotted and seen many different varieties of Nudibranchs, so we decide to write this short blog about a few nudibranch facts.

Nudibranchs are a group of sea slugs that have magnificent bright colors and are known around the world for that. There are really few restrictions to what colour these creatures can have. Mostly they are natives to more tropical waters but actually, 178 species have been described in Scandinavian waters.

Check out this interesting clip:

Nudibranchs have no gills. They breathe through their skin or through secondary gills (also known as ‘’naked gill’’) that are found on their backs. A group of Nudibranchs (Cladobranchia) also have some brightly coloured organs on their backs called cerata(in Greek cerata= horns). These are used for many purposes such as respiratory and attack/defense. Sometimes the digestive system extends to the cerata. Nudibranchs are highly stenofagous, (in Greek meaning steno=narrow and fagous=eating) which means that they will only prey on 1-2 kinds of organisms. The most common of these are sponges, bryozoans and cnidarians. There are also known some nudibranchs that can incorporate zooxanthelle (algae) in their bodies and live in a symbiosis.

Nudibranchs don’t have a shell. This makes them more exposed to predation. But through many years of evolution they have acquired some defenses such as toxicity, (acid secretion) which can either be provided by self-production or by eating something that contains toxins, and camouflage, which makes them resistant to many predators. They still have a few predators including other Opisthobranchia and sea spiders. Some cnidarians have nematocyst cells (toxin producing cells), and since the nudibranchs eat them, and the digestive system sometimes travels up the cerata, the nematocysts can be extracted and used by the nudibranch as a defense mechanism.

Nudibranch facts, like other snails, are hermaphrodites, which means that they have both male and female reproductive organs. So in reproduction, sperm is exchanged from both partners where it is stored until the eggs are ready for fertilization. The eggs are usually laid in spiral formations and have a nice visual effect. (see photo above).

Like many other animals, they communicate with chemical signals. For example when they are at larval stage, where they float in the water, they don’t metamorphose until they get a signal from a specific hormone, which could for example be an indicator that there is food in the area. They can sense these chemical stimuli with the help of a pair of tentacles which they can’t withdraw, near their mouth. These tentacles are called rhinophores.

To learn more about the nudibranch facts, why not complete your Advanced Open Water Course, within this course we have a Fish identification section.

Many times throughout the year we get asked this question, and the simple answer is Yes you can dive on wrecks. In Gran Canaria, we have many wreck dives available all year round. Wrecks are still classed under recreational diving, and the main types are shipwrecks, however, there is also plane wreckages and artificial reefs that can be classed as wrecks.

Here are some interesting facts about angel sharks: Adult angel sharks are usually 5 feet long but some species, like the Japanese Angel Shark can grow up to 6.5 feet. An average angel shark weighs around 77 pounds. In the wild, angel sharks can live between 25 and 35 years old.

During the year we run two Instructor Development Courses, usually in May and November. The PADI instructor development course is a weeks long course involving topics such as: Learning, Instruction and the PADIi System, General Standards and Procedures, Risk Management

Read more
Back to blogRecreational divingDiving Courses
Back to top
a { color: unset; text-decoration: red; }